Primary congenital glaucoma (PCG) is a leading cause of blindness in children worldwide and is caused by developmental defects in 2 aqueous humor outflow structures, Schlemm’s canal (SC) and the trabecular meshwork. We previously identified loss-of-function mutations in the angiopoietin (ANGPT) receptor TEK in families with PCG and showed that ANGPT/TEK signaling is essential for SC development. Here, we describe roles for the major ANGPT ligands in the development of the aqueous outflow pathway. We determined that ANGPT1 is essential for SC development, and that Angpt1-knockout mice form a severely hypomorphic canal with elevated intraocular pressure. By contrast, ANGPT2 was dispensable, although mice deficient in both Angpt1 and Angpt2 completely lacked SC, indicating that ANGPT2 compensates for the loss of ANGPT1. In addition, we identified 3 human subjects with rare ANGPT1 variants within an international cohort of 284 PCG patients. Loss of function in 2 of the 3 patient alleles was observed by functional analysis of ANGPT1 variants in a combined in silico, in vitro, and in vivo approach, supporting a causative role for ANGPT1 in disease. By linking ANGPT1 with PCG, these results highlight the importance of ANGPT/TEK signaling in glaucoma pathogenesis and identify a candidate target for therapeutic development.

ANGPT1 is the primary TEK ligand in SC development. 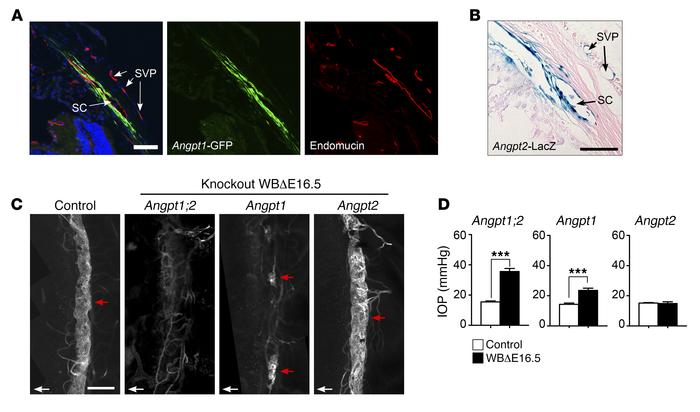 () Localization of expression in the limbal region. Cryosections from adult GFP knockin mice show strong GFP expression in the TM and cells adjacent to the SC outer wall. Endomucin staining outlines the SC endothelium and capillaries of the superficial vascular plexus (SVP). () expression in the anterior chamber. Paraffin sections from adult X-gal–stained LacZ knock-in mice show X-gal staining in the SC and corneal endothelium, as well as capillaries of the SVP. () In comparison with control littermates, eyes from mice with defective angiopoietin signaling failed to develop a normal SC. As previously described, double-knockout () mice completely lacked SC. Interestingly, however, while WBΔE16.5 mice exhibited a severely hypoplastic canal with only focal development, WBΔE16.5 mice had no apparent defect. () IOP measurements showed similar results ( = 12, control = 42; = 7, control = 14; = 3, control = 4). This highlights the role of ANGPT1 as the major TEK ligand in canal development, though it suggests the possibility of limited compensation. Red arrows in highlight SC. White arrows indicate the direction of the cornea. Note that faint staining in and knockout panels is out of focus light from the ciliary body and limbal vascular plexus. Scale bars: 50 μm ( and ) and 250 μm (). *** ≤ 0.001 as determined by Welch’s test.